How to Repair or Replace a Head Gasket

The images below show what’s involved in repairing a cylinder head gasket, from the initial strip down to re-assembly. Modern engines are fairly complicated, with numerous additions to help the engines efficiency, smoothness and control. However, the task is fairly straight forward, it just takes time, energy and some mechanical engineering ability. If you’re not planning to do the job yourself, the images may give you an idea of what is involved and why garage costs can be high.

The vehicle in this example is a 2.5 litre, 5 cylinder Land Rover TD5 diesel engine, so it’s of a reasonable size and weight. An engine hoist is used to lift the cylinder head off, as the head still has lots of ancillary components attached, (I have seen others lift this size head off by hand). Smaller engines should be no problem weight wise.

The biggest single components of the engine (excluding the gearbox) are the ‘block’ and the ‘cylinder head’. Most components are contained within, or attached to them.

The head gasket is important because it keeps the engine coolant, oil and combustion gasses from escaping, or mixing with each other.

Mouse over or touch the screen to pause the slide show, drag the images or use the direction arrows. 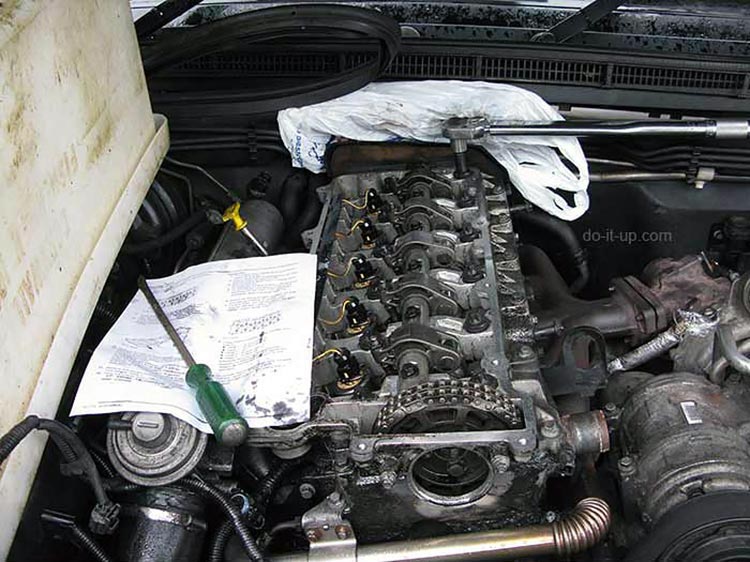 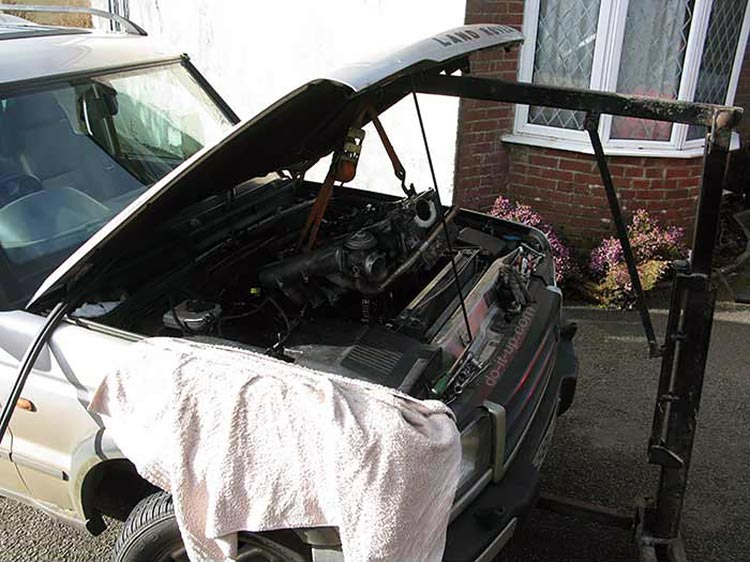 Remove the Cylinder Head from Vehicle 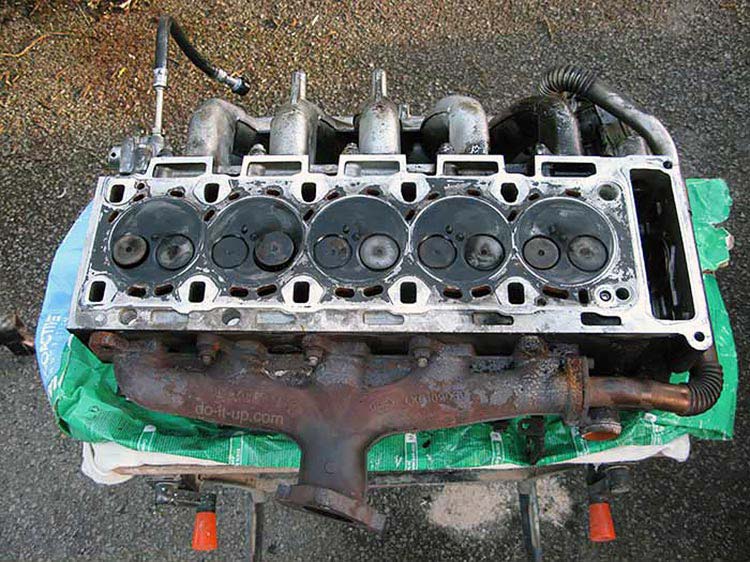 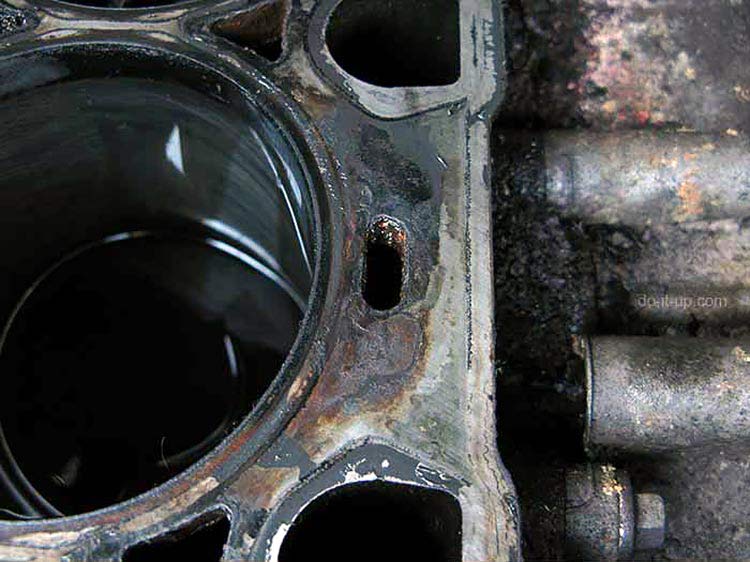 Check and Clean the Engine Block 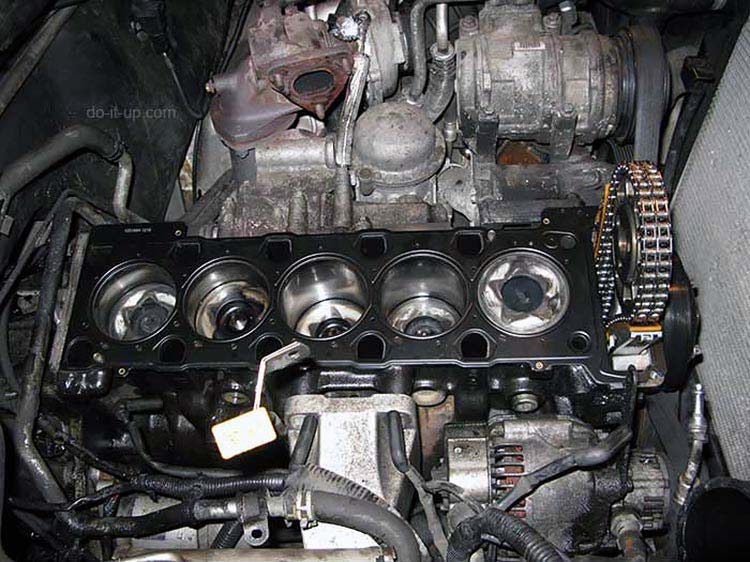 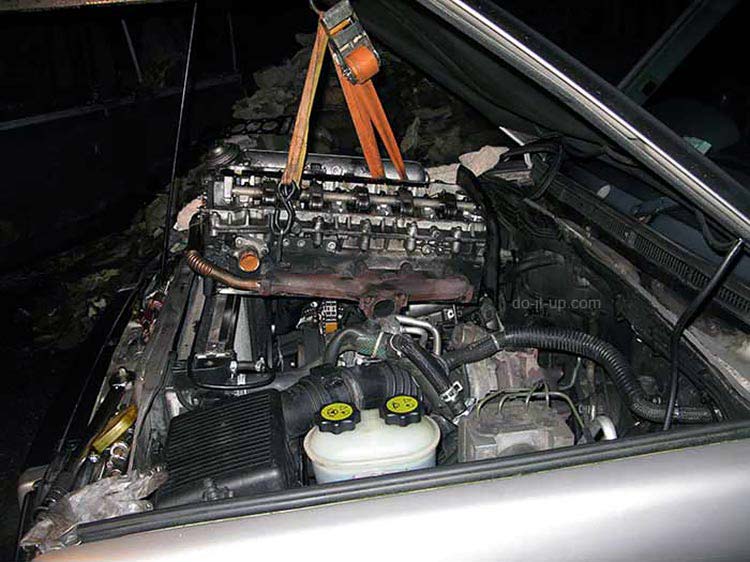 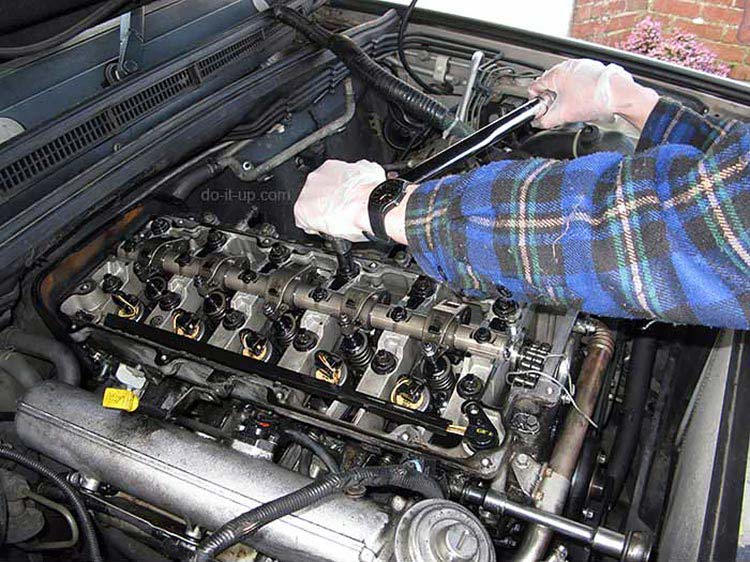 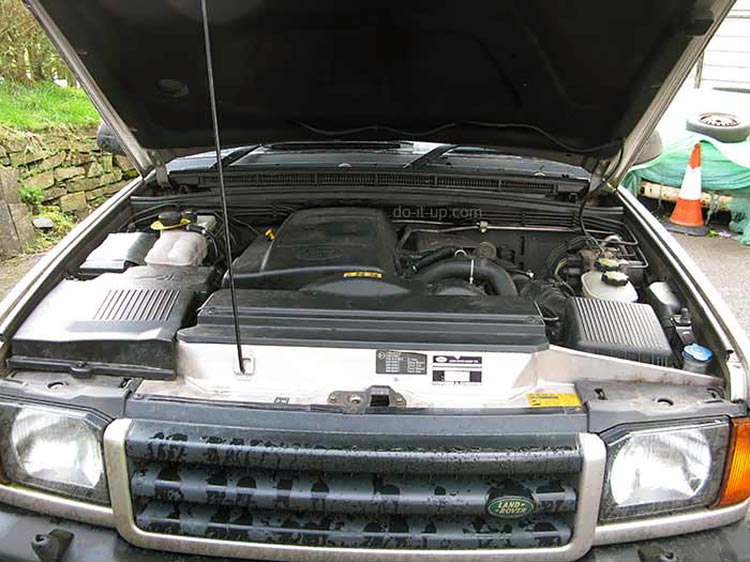 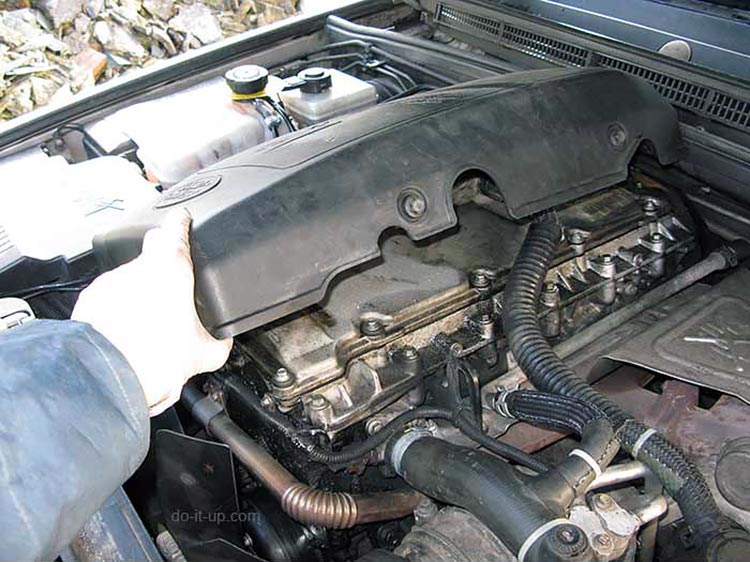 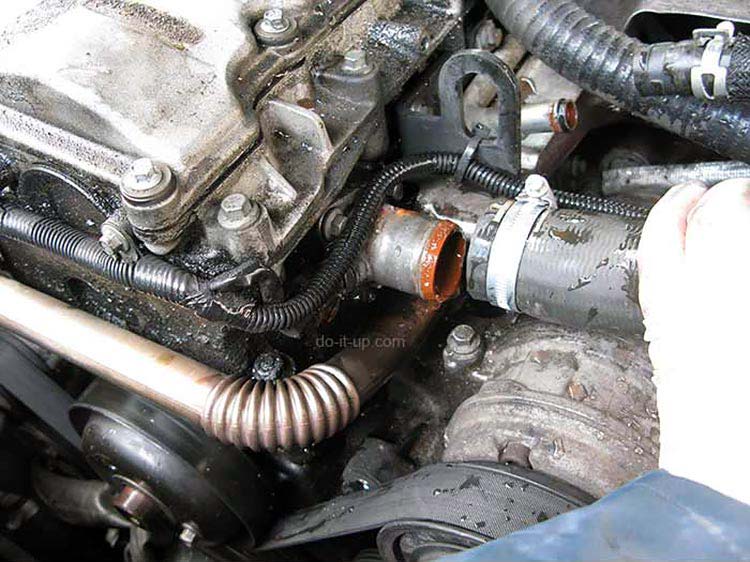 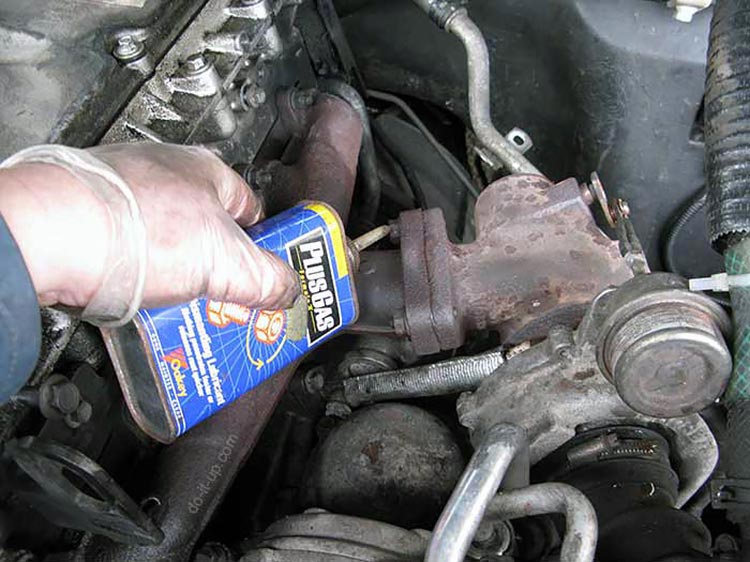 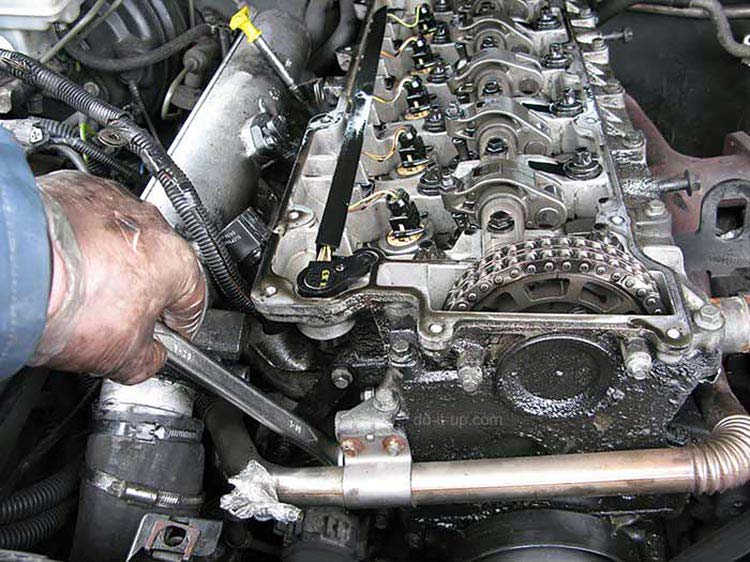 Remove all the Connections 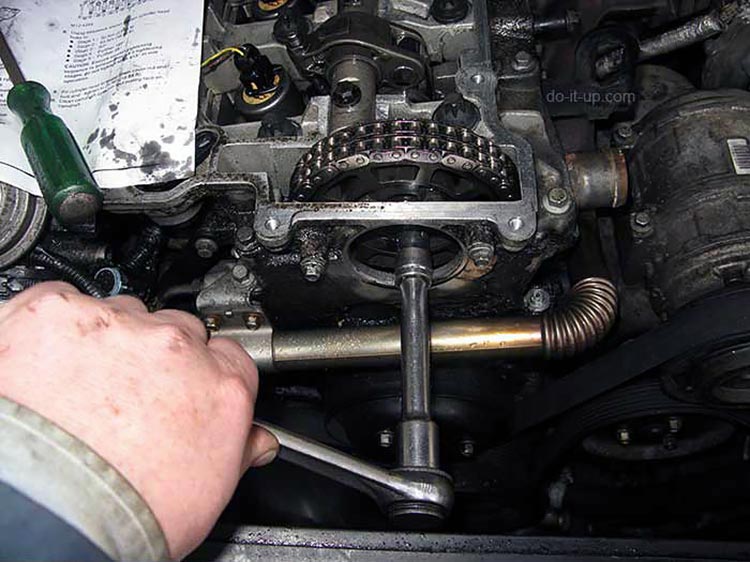 The following is a rough list of the steps required to remove the engine cylinder head.

(These are based on my own experiences):

Symptoms of a ‘blown’ head gasket may be a combination of the following:

The Fault on this Particular Vehicle Was:

Under normal conditions, when the engine is hot, the coolant system is under pressure (due to heat expansion). When the system is cold, there should be little or no pressure.

Water can escape through a faulty head gasket and exit the vehicle through the exhaust, or enter the oil lubricating system. It can also be expelled from the cooling system by over pressurisation as described above.

Oil enters the coolant system through a faulty head gasket, or is burnt, expelled through the exhaust.

The upward movement of the engine’s pistons, compress the air and fuel mixture in each of the engine’s cylinders. If there is a faulty head gasket, the compression is reduced in one or more engine cylinders, as the head gasket seal may be broken and pressure generated by the piston can escape.

There are several tests that can be performed. They may not always directly point to a fault but can provide an indication. Sometimes you have to go on gut instinct and putting 2+2 together because of a combination of fault indicators.

Safety is important – Follow the precautions contained in the vehicle handbook/repair manual. They are there for your safety.

Additional issues can be discovered, once the head is removed.

The charges for replacing the head gasket can be high due to a large amount of labour, typically 75% (with newer vehicles, a large number of items have to be disconnected to remove the head).

If you have the confidence, performing the task yourself can save the large labour costs.

Next - How to Buy an Oil Sump Drain Plug or Washer >